The beginning of Carleton Lodge # 465 is somewhat shrouded in mystery. There is no record such as minutes of meetings to indicate how it came about, or who started the proceedings that sponsored the Lodge. Nor does Grand Lodge have any record of a petition to form a Lodge in Carp. However, information from records and other sources appears to show that Mississippi Lodge in Almonte was probably our sponsoring Lodge. Their records show that their members had signed a petition that they would not object to a Lodge being formed in Carp, also a large number of Charter Members held membership in Mississippi. The original Lodge rooms were on the second floor of the Kidd block

Many of our earliest members were leading citizens of Carp and surrounding areas, and affiliates from city Lodges. They included a doctor, a pharmacist, banker, farmers, clergymen and merchants, and many of their names still live on as members of the community and of the Lodge. Other historical notes from 1904 are as follows: the Ottawa Silver Seven won the Stanley Cup, Sir Wilfred Laurier was the Prime Minister, population of Canada was 5,400,000 and Ontario 2,200,000. Milk was 7 cents a quart, bread 4 cents a loaf and food prices stayed relatively stable till the outbreak of WW1. Carleton Lodge was duly constituted on January 12th 1904 by R. W. Bro. Dr. Clarey DDGM of Renfrew Ottawa 16 assisted by Bro. Edward Kidd MP as director of ceremonies and Bro. John Argue Past Master acting as Chaplain The Lodge was opened. July 20, 1920 Carp Village was hit by a catastrophe. A fire destroyed seven places of business and the Masonic Lodge with contents. The fire started in the Tin Shop of Joe Rishaur about seven o’clock in the evening. His tin Shop was destroyed. Next door to the Tin Shop was the place of business of Ossie & Ephraim Scarf. This too went. As well as the Grocery Store of George H. Bishop. Next was the “Kidd Block”, which contained the Bank of Nova Scotia, Carp Review Printing Office, Huntley Public Library and the Carp Drug Store. The fire then jumped the street and burned out the Dry Goods Store of Austin Younghusband. It was pandemonium in Carp that night. Dr. A.E. Hunt’s residences across the street was in constant danger, also the residence of Millie Hemphill and Joe Loftus, and Carp had only a volunteer fire brigade. It was a light wind from the Northwest, which helped in the fight to save Dr. Hunt’s house and the Hemphill and Loftus homes, but brought disaster to Austin Younghusband, as the wind was enough to drift the heat and flames to burn up his store. The Masonic Lodge occupied the upper floor over the Drug Store and lost everything. W. Bro. A.B. Hyndman reported on June 21 1929 that “the Church Property-Building and Grounds can be purchased for the sum of $250.00” It was moved and adopted that the committee be instructed to purchase the Church property at the price stipulated. The Lodge was now galvanised into action for the task of raising funds in order to convert the building and property into a fit and proper home for a Masonic Lodge. The first meeting to be held in the newly constructed Masonic Temple was on December 13, 1929, a very joyous occasion for all the officers and members. After nine and a half years of making do, sometimes under trying circumstances, the members now had a new Masonic Temple that they could call their own and be justly proud of.

We are happy to meet on the fourth Thursday of each month and sorry to part for the months of July and August.

Emergent meetings are summoned at the discretion of our W.M.

The Village of Carp in the Township of Huntley lies in the western-most ward of Ottawa, approximately ten kilometers west of Kanata. The population as of 2012 is estimated to be approximately 2000. The official boundary for the village was established in 1979 and Huntley Township was amalgamated with the City of Ottawa in 2001. The village sits on the edge of the Carp Escarpment (or Carp Ridge), a geological fault running through the Carp River Valley.

Carp has been a major centre for agricultural activities since the 1800s. The Carp Agricultural Society and the annual Carp Agricultural Fair date back to 1863. The Carp Fair (2017 will mark the 154th Fair) draws visitors and participants from all over Ontario, Quebec, and the New England States. The Carp Farmer's Market is held every Saturday from April/May to October on the the southern part of the Fair Grounds and attacts regular visitors from Ottawa and many of the towns and communities around Carp. Located a short distance from the Carp Fair grounds is the other well known feature of Carp, namely the Diefenbunker, built in the 1960s to house the principals of the Federal Government in the event of a nuclear attack on Ottawa. 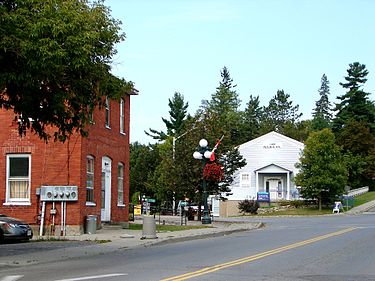 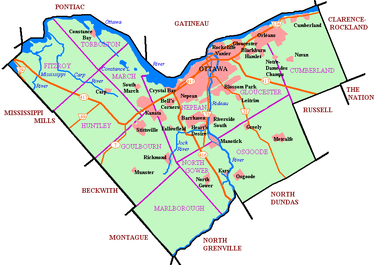 Carleton Lodge No. 465 welcomes your feedback and questions. The best way to contact us is by using the Contact Form in the link to the right. However, please find on the contact us page our address, phone number, and driving directions.